I heard from my family that he got sick. I called Chicago to ask about his health after he was diagnosed with rare ALS (Lou Gehrig’s disease). It was Wednesday night on Nov 12, 2014 around 9:40PM Baghdad local time, 12:40PM Chicago time. My uncle George told me that the disease is in its final stage, and he is still alive but on a respirator until his last breath.

George finished our conversation with a final word: “Maktoob.” 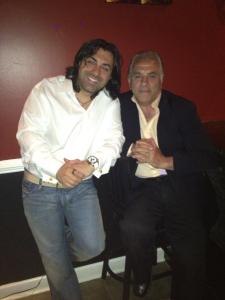 He said it in Aramaic “Iktoo-ta-la”. I remembered the Arabic translation of it, “Maktoob.”

Maktoob is Arabic word for: “It is written.” It is the “unknown” certainty.

A well-known proverb in Iraq is:

“What is written on your forehead, your eyes will see!”

It means that people are prisoners of their fate. What has been written for Matthew’s final episode from his life script – his death sequence event, will be unfolding in the upcoming days.

Maktoob reminded me about my own script. I always wonder about my life when I see people died in a sinkhole or a bridge collapse. Yet, I survived three deadly wars. I’ve seen the Angel of Death and felt his presence so close in Iraq. One time I was 50 feet away from a mortar attack, a concrete wall in the shape of an upside down letter T saved me. Or another time, someone ambushed us with a few rounds of bullets. Could these be a few climaxes that were “written” to bring some excitement in the movie of my life?

In the early part of my life, I used to attend a Presbyterian church. I heard many Church sermons about God’s omniscience about human life. Many pastors talked about God’s personalized plan for each individual. They said difficulties, sickness, and death are events written for each person in the “Heavenly Book”.

But what puzzled me back then, and still does, is: if everything is written, then what is the point of a prayer that asks to change the course of events? And, could this future be modified? Is everything written for the good of me?

I guess there is an invisible hand in heaven that wrote my fate. It wrote my life script and destiny. Wrote my future. Wrote my ending. And the Angel of Death is waiting for the execution order from God.

I understand many people, including myself, have a hard time accepting “Maktoob”. It is easier to believe that fate is a result of the Universal Randomness.

In “Man’s Search for Meaning”, Viktor Frankl writes there is meaning in suffering. I am not sure if there is a meaning in slow death by disease – is it God’s version of the Chinese water torture?

Filling our lungs with air naturally without the aid of a respirator is a blessing many of us take for granted.

One day the Angel, or Randomness, will visit me and take my life, the biggest fear is not knowing how. Can I put in a request for a sudden death?

I want to die quickly.