James Gandolfini is in Basrah…Arab Actors learn this!

Thank you very much operation Goody Bag. It came to my attention that your bags were distributed at the U.S. Consulate General Basra, Iraq. Three lollypops and a thank you card saying “Saying Thanks to those who serve!” were giving in honor in of James Gandolfini. I love James, his memory will always live inside me. 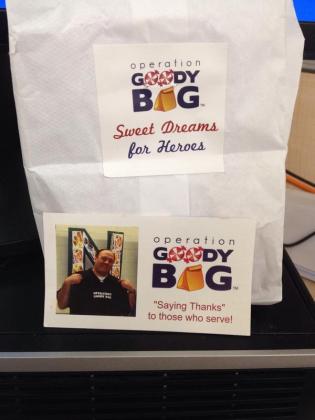 It reminded me about the movie P.S. I love you. He is dead, but keeps sending messages of “Thank you” through his foundation and volunteers. Thank you to all of the team members in Operation Goody Bag.

As an Iraqi, I couldn’t stop thinking about all these Arab actors and actress who come on TV in the Arab media and criticize America and Americans. I wish they would do something similar. I hope they can learn just a little bit about the concept of “Giving” back to their Arab society, and being role models to revive the most fundamental fiber – “Giving”, a missing value in the Arab society, a society that has been concentrated on the concept of “Only Taking”.

The only giving I hear happening from the millionaires in Qatar and Saudi, is the donation of money to the schools of Islamic fundamentalism.