I have LTS disorder from my Linguist’s life in Iraq…Are you infected?

Before you read about my LTSD disorder, allow me a few minutes for a little background about the linguist in Iraq.

I have been working as a linguist for almost seven years. I worked four years with the U.S. Army and three years so far with U.S. Embassy. I think every book about the US involvement in Iraq should have a chapter about linguists. This blog could be a page in a book.

I have seen the good, the bad, and the ugly side of the linguist’s life during those years. I met a lot of people who became linguists. I can easily guess there were maybe 8,000+ American linguists supporting the U.S. Mission.  During 2004-10, many people  quit their jobs in the U.S. and come to Iraq and worked as a linguist. I was one of them.

Money was the main reason for all of us (a few people claim other reasons). We were getting around $$$K a year. In addition to the salary, we had free housing, free food, and $80+K of free tax. 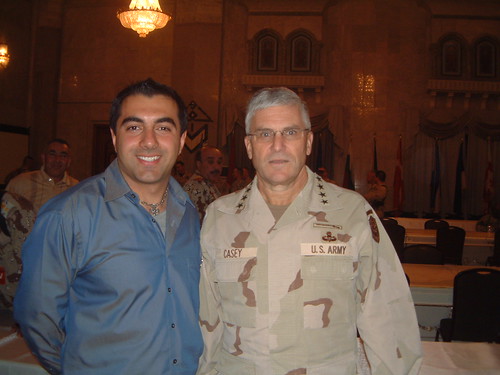 Linguist came from a variety of Arab-American (Iraqis, Algerians, Lebanese, Syrians, Jordanians…). They came from different professional backgrounds. Some people were unemployed in America. Some had jobs like taxi drivers, factory workers, grocery store owners, cashiers, teachers, singers, truck drivers, doctors, lawyers, realtors, Dollar storeowners, and like myself, a computer consultant. I use to be a programmer chef for five years. I was cooking JavaBeans code from recipes given by the business analysts at Accenture. And now, I have become a mouth for many to use.

People came in all categories from a dropdown list of sexual preferences: male, female, gay, and including those who selected “I rather not say.”

Here are some examples of linguists’ backgrounds for high U.S. officials in Iraq: taxi driver, truck driver, and nightclub bouncer. One linguist, working for a U.S. Army four-star general, had been a taxi driver.  Another, serving a three-star, had been a truck driver.  And the guy attending all the high-level meetings with one of the U.S. Ambassadors, he was a bouncer in a nightclub!. Go figure!

Linguists came from a variety of age brackets. I have seen linguists as young as 18 years old to almost 80 years old. During those years, the contracting companies were so desperate to bring people and fulfill their contractual agreement that the only person left to be a linguist was my grandmother.

The linguist job had no requirements except English-Arabic speaking ability. Almost all these linguists had no linguistic degree, or no degree at all.  A few linguists had degrees from their country of origin. Basically, any Arabic origin person who was able to handle a five-minute dialogue punctuated with “yes” and “no” was accepted.

For almost all linguists, coming to Iraq was the first experience to be embedded inside the U.S. Army. A linguist was assigned to a military unit or civilian office under the supervision of a point-of-contact (POC). POCs used to lend us to different POCs to help out in translations.

It didn’t take long for POCs to start using the line “MY terp” (Terp is short for interpreter). POCs used to argue with each other about “My terp is better than yours”. Another personal example from the general I used to translate for:  he asked General Martin Dempsey, “You have a hot female linguist, would you like to trade?” – (he did have a hot female linguist). I looked around to at the General and said “Excuse me sir!”

POCs were always using the phrase: “MY terp!”. On another occasion, my POC called me “My terp”, I turned around and him, who was a U.S. Army Colonel – “Sir, you make it sound like I am your bitch!” He understood my point about the “MY terp”.  “My terp” became a derogatory term for linguists. This was one of the common experiences for all linguists in Iraq. It became one the main reasons for tensions in the work environment.

During my holiday visit to America, I started to compare the life quality of working abroad as a linguist contractor with my working life in America. As days passed by, I started to feel strangely happy about working as a linguist. The job was very easy. As I said to many, “I speak and make money”. It doesn’t get more simple than that.  No deadlines. No milestones. No sell numbers to hit. No 100 cc-ed emails. No clients kissing ass. No customers to please.  No take-home work. But mainly, NO BILLS to see.

However, the life quality of being a linguist contractor came at the expense of a different loss. Many linguists started to feel this loss. Humorously, I started to label this loss as Linguist Trauma Stress Disorder (LTSD). And, this order has two major symptoms: Ruined working habits and Ruined self-worth value.

Many who have already gone back to America are suffering from LTSD. Linguists remember those years where they made about $$,000-$$,000 a month, and now they are unemployed or work for much less money each month. Mentally, is very difficult to adapt back to.

I sometimes tell my linguist friends, “We have become like a prostitute.” It is very difficult for a prostitute to work in 7-11 convenience stores. She might be making $500 an hour, and now she has to work a whole week to earn that!?

As I said earlier, many people had blue collar professions in America before coming to work as linguists in Iraq, such as flat-tire repair guys, factory workers, and cashiers to list a few. Many of these people worked in very important positions with the U.S. Army in Iraq. Many of them interacted with high ranking Iraqi government officials; such Iraqi officials were impossible to reach or talk to during Saddam’s regime.

I saw many of these people internalize their importance and self-worth. Many started to feel good about themselves. As one of my linguist friends told me: “Working with the U.S. Army, made me feel really human with integrity and self-worth.”

I saw and heard many of my fellow linguists complaining and stressing from the thought of returning and working in their previous professions in America. They cannot see themselves as truck drivers, cashiers, or factory workers.

I feel for my linguists friends.

It became mentally damaging to our personality. This has made us mentally and physically damaged (being lazy). Some of us got jobs, or will get jobs, upon returning to the U.S., but it will never be the same.

And that is why I am still working as a linguist!